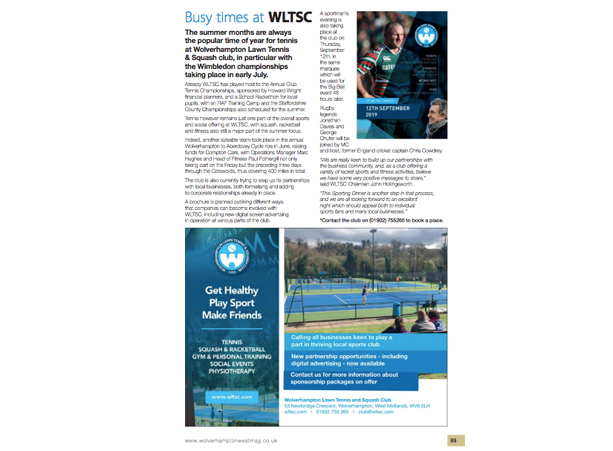 The summer months are always the popular time of year for tennis at Wolverhampton Lawn Tennis & Squash club, in particular with the Wimbledon championships taking place in early July.

Already WLTSC has played host to the Annual Club Tennis Championships, sponsored by Howard Wright financial planners, and a School Rackethon for local pupils, with an RAF Training Camp and the Staffordshire County Championships also scheduled for the summer.

Tennis however remains just one part of the overall sports and social offering at WLTSC, with squash, racketball and fitness also still a major part of the summer focus.

Indeed, another sizeable team took place in the annual Wolverhampton to Aberdovey Cycle ride in June, raising funds for Compton Care, with Operations Manager Marc Hughes and Head of Fitness Paul Fothergill not only taking part on the Friday but the preceding three days through the Cotswolds thus covering 400 miles in total.

The club are also currently trying to step up their partnerships with local businesses, both formalising and adding to corporate relationships already in place.

A brochure is planned outlining different ways that companies can become involved with WLTSC, including new digital screen advertising in operation at various parts of the club.

A sportman’s evening is also taking place at the club on Thursday, September 12th, in the same marquee which will be used for the Big Ball event 48 hours later.

“We are really keen to build up our partnerships with the business community, and, as a club offering a variety of racket sports and fitness activities, believe we have some very positive messages to share,” said WLTSC Chairman John Hollingsworth.

“This Sporting Dinner is another step in that process, and we are all looking forward to an excellent night which should appeal both to individual sports fans and many local businesses.”