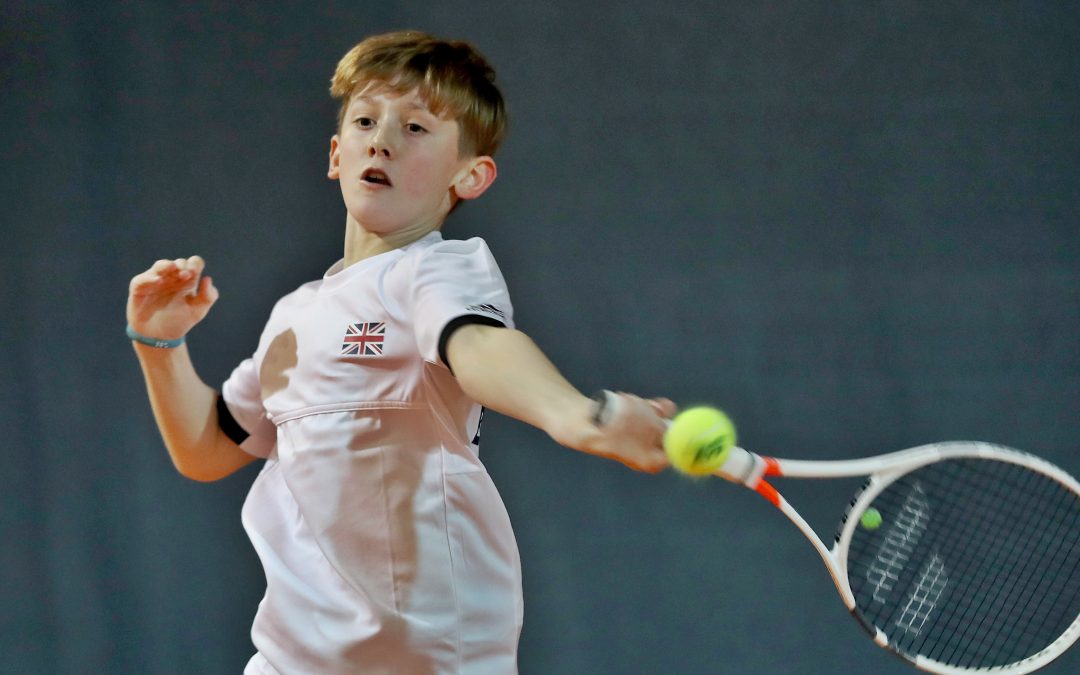 Reaching the final of a top European tournament once won by Andy Murray and Rafael Nadal is the latest sign of promising progress for young WLTSC tennis talent Henry Trump.

It was at last month’s Super 12 tournament in Auray in France, effectively regarded as the individual European Championships for Under-12s, that Henry stormed through the draw before being beaten in the final.

Henry, who recently turned 12, has made impressive progress at WLTSC and remains committed to receiving coaching, physio and strength and conditioning at the club in conjunction with time spent at My Tennis Academy at Nottingham and LTA Centre at Loughborough.

“Henry’s elder brother Oscar had lessons with me when he was younger and Henry then started coming to Tots Tennis, for two to four year olds, with Amber Quick,” says Paul Hodgetts, Everypoint Rackets Manager at WLTSC.

“Henry showed good natural hand-eye co-ordination, started to have lessons with Nick Morris, and from there got fast-tracked into our invitational programme where players with a certain level of competitiveness or potential are asked along to additional sessions.

“The tennis ability and athleticism were there but we are also always looking for other attributes as well.

“Concentration, competitiveness, stubbornness, resilience….a lot of young players can throw and hit balls and catch balls but Henry showed a good determination and competitive streak alongside his tennis skills.”

The progression from there saw Henry move on to county tennis, regional standard, national and then international competition.

That has included national camps at Roehampton, and the regular court time at Nottingham and Loughborough, the advantage of which is that his WLTSC coach Nick is also involved with the LTA and the twice-weekly sessions at Nottingham.

“I think from the time Henry was maybe six or seven you could start to see a real difference and that he had an edge on the other players of his age group,” says Nick.

“As time went on he started competing in national tournaments for the year above and he was always ahead of the curve.

“The Super 12 at Auray is one of the three biggest tournaments for Under-12s in the world, the others being the Orange Bowl and Eddie Herr events in Florida.

“Apart from hosts France, only two direct entries are allowed from each country at Auray, although a couple of other British players came through qualifying and we ended up with three in the semi finals.

“That was a great success for Henry, and also for British tennis, and follows him playing a key part in helping the GB team to the semi finals of the Winter Cup – effectively the team European Championships – in the Czech Republic in February.

“Henry has made some really impressive progress over the last six months or so, and it is working really well to have the three different avenues of him training here, and then also at Nottingham and Loughborough.

“It is really useful that he still has his coaching and strength and conditioning and physio here at the club – we are able to tie everything together – and it also keeps him really grounded.”

As well as the coaching, that strength and conditioning work is provided at WLTSC by Billy Hughes, and the physiotherapy by Patrick Hyde.

Mum Emma agrees it is an approach which is reaping results.

“All of the different elements are taken care of and the club has good communications with the LTA so it works really well,” she explains.

“I like it because it keeps things a bit normal and, despite Henry’s successes, means that no one is getting carried away.

“The club is like a second home for us, we live really close by, and the social element is really good for Henry with all the young players.

“Henry has always been very relaxed and taken everything in his stride, and he can come back from any tournaments and play against friends here who have never ever played a tournament themselves.

“Henry has always been very competitive from an early age, even if it was playing against his brother on X-box, and there has been a lot more interest in him following the Auray tournament.

“For us though it is also about keeping things realistic and sensible – maybe ultimately landing a scholarship at an American University is a good aim, and anything else on top of that would just be a bonus.”

And therein lies the shared ambition for Henry from all of those at WLTSC involved in his development.

Enjoy playing, give your best, and see what happens in the future.

“From now it is all about how Henry grows physically, how he develops, how he copes with the travelling,” says Paul.

“He is certainly on a route of maybe getting to being a full time player, taking part in junior Wimbledon – he has that potential but no one will be getting carried away.

“Henry and his family have always been very loyal in trusting the club and the coaching here and, regardless of where he goes in his career, this is the club where hopefully he will always come back and perhaps represent us as a first team player.”

“The good thing for Henry is that he is ticking all the boxes in his development but we never look too far ahead in the future,” adds Nick.

“Every day we just say we are going to get a little bit better – that is a plan that seems to be working at the moment so it is one we will continue.”

*We will feature more of the club’s performance players and other members across tennis, squash and racketball in the coming weeks.

Henry, who was named as the recipient of the Outstanding Achievement Award at last night’s juniors awards evening, is pictured in action at the Winter Cup.  Picture courtesy Tennis Europe.