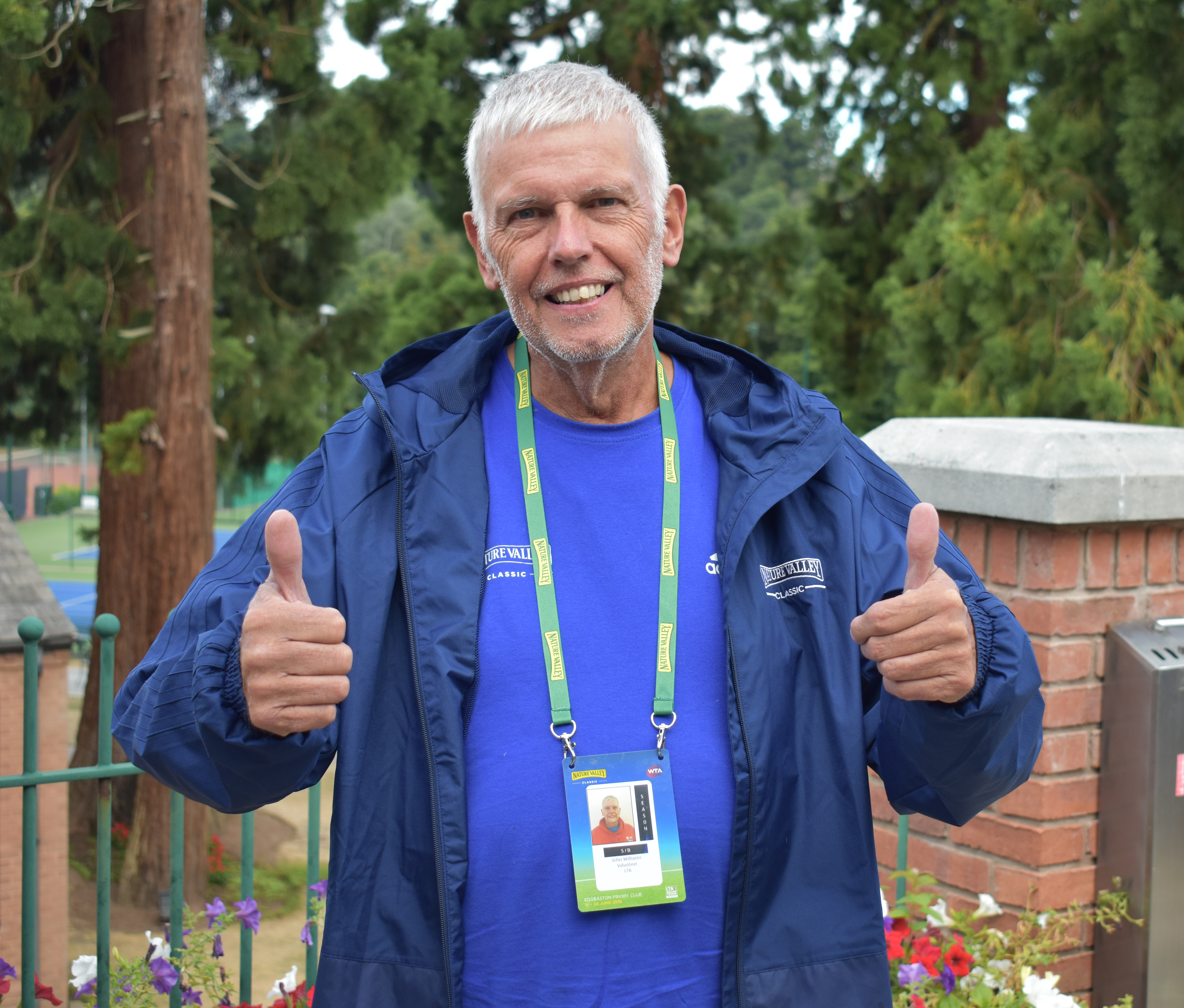 For any thriving sports or leisure club, the trusted work of a band of loyal volunteers can underpin so many of the activities that are delivered.

People who are willing to step in, give their time, help out, and generally provide support to ensure events run smoothly and to a high quality.

Wolverhampton Lawn Tennis & Squash Club is no different, and one member has taken that helpful and ‘can do’ attitude on the road with his assistance at the biggest annual tennis tournament staged in the Midlands.

And so, it wasn’t just Tom Welsh who particularly enjoyed attending this year’s Nature Valley Classic at Edgbaston Priory, where he was able to exchange rallies with some of the top female players in the game.

WLTSC member John Williams, who is also an experienced coach, was one of the many volunteers who helped ensure this year’s tournament in the Second City ran without a hitch for the thousands of spectators who attended.

John saw an advert on the internet seeking volunteers, put himself forward, underwent an interview and training session, and was then there, five days out of seven, at the tournament itself.

“It was a great few days – I really enjoyed it,” he says.

“For the first three days I was there I was positioned in the Kids Zone, just helping the young visitors to the tournament to have fun.

“You didn’t even have to be a tennis coach for that, and there was one lady there who worked in swimming and didn’t know anything about tennis – it was all about just getting the young people hitting some balls and enjoying themselves.

“Sometimes there were 60 kids there at any one time, and they would be put into groups for the different activities.

“During the rest of the week, I was either on court duty, making sure spectators came and went to their seats at the right time, or as ‘meet and greet’, pointing people in the right direction when they arrived.

“It is the first year I have volunteered, and I really enjoyed it and would love to do it again next year hopefully.”

John was full of praise for the way the tournament was run and how volunteers were looked after.

And he says it was a privilege to be able to view at the first hand the professionalism and attention to detail of the world’s top players.

“As a volunteer you do get to see some of the tennis, which is great,” he added.

“And you also get to see behind the scenes as well, whether that was Garbine Muguruza going through a skipping drill as she warmed up for her match, or Petra Kvitova waiting for an interview.

“The level of detail the players show in preparing for their matches is incredible.

“I also got to see Tom (Welsh) as well, hitting with the top lady players and holding his own – he hardly missed a ball!

“As a volunteer it was so well-organised and you get really well looked after.

“You get the training beforehand, and then parking, meal vouchers, tea and coffee, the kit, nothing is left to chance.

“The organisers know they are getting a good day’s work from the volunteers but they do make it really enjoyable as well.

“I am looking forward to hopefully going back next year already!”

John has now been a member at WLTSC for over a decade, acting on a recommendation from Don Goodman having previously played for Linden Lea and The Albert.

Although initially joining with the intention of improving his health and fitness with regular sessions at the gym, instead it was tennis which continued to capture his attention.

WLTSC runs in the family somewhat as John’s Dad, who passed away in 1998, attended the club, brother David was once a prominent member of the squash teams and sister Penny Hunt remains a long-term member.

“I still really enjoy the tennis, the indoor courts here are fantastic and the club has a lovely set of people,” John explains.

“I still play a fair bit of tennis, whether that be Rusty Rackets or the mix-ins, and I have tried Cardio Tennis a few times as well.

“The club is in such a lovely setting as well that, now I am retired, I would be happy enough just popping down and sitting here reading a book, or watching some of the excellent juniors having a hit.

“I still do a bit of coaching with the community scheme at West Park and Aldersley, and also at my old school, Our Lady and St Chad’s.

“I have got involved in Tennis For Kids, a wonderful scheme from the LTA, which aims to get young people started in tennis and can be played anywhere.

“It is such a great sport, and with the success of the likes of Kyle Edmund and Johanna Konta on the back of Andy Murray, hopefully it is also a sport which is back on the up.”