Andy Can’t Get Round Robin At Internship Conclusion 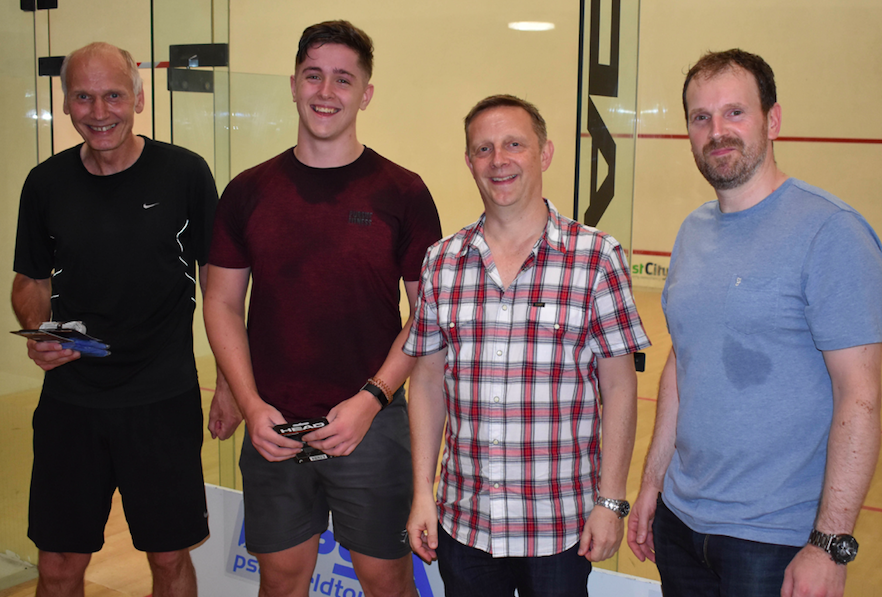 Andy Hepworth was unable to quite make it a memorable finish to his year-long internship at WLTSC as Robin Chipperfield stayed strong to round off an excellent FA Cup in squash and racketball competition on Friday night.

Robin continues to prove one of the men to beat on the squash court in either discipline and, having chalked up a hat trick of annual racketball titles earlier this year, added the cup to his trophy cabinet thanks to victory over Mike Harris in the ‘A’ Final.

He then followed that up later in the evening by swapping rackets to claim the ‘A’ squash event thanks to a narrow 3-2 victory against Andy, who produced several gravity-defying leaps around the court during the final.

Andy has spent the year working at the club as part of his studies for a Business Marketing Degree at Aberystwyth University, his role involving not just marketing but also organising events and getting involved in many wide-ranging areas of the club.

“Win or lose it was always going to be a great way for me to finish,” said Andy, who will return to Aberystwyth for his final year of study.

“It was nice to be able to organise the event, and I’d had the inspiration from the tennis FA Cup which was played in the Winter, away from the normal tennis season.

“With this event it has been good to get people playing competitive squash and racketball during the summer and out of the normal season for those sports.

“There were a lot of people here for the finals night and hopefully it will continue to encourage people to keep playing throughout the year.

“As for the internship, I don’t think I could have gone anywhere better.

“There were bigger companies I might have been able to go to but to come here and have a lot of responsibility has been brilliant.

“It has really given me an insight into different types of marketing and how you need to get the message out to people in many different ways.

“Obviously I have been a member here for many years, so I will still be coming back to play when I am back in Wolverhampton and catching up with everyone again.”

Elsewhere on FA Cup Finals Night, Head of Squash and Racketball Chris Dawson was also a double winner in both plate competitions, defeating the club’s Operations Manager Marc Hughes in the racketball event, and Jodie Hodgkins in the squash.

“It was another competitive but also fun competition and credit must go to Andy for organising the event, a great way to end his year-long internship at the club,” said Chris.

“The idea behind the FA Cup was to bring in an event which encouraged more people to keep playing through the summer which is the traditional ‘off season’ for squash and racketball.

“It has certainly proved worthwhile in that respect with so many players taking to the courts, and we are continuing to aim to attract more people of all ages and abilities to get involved in such healthy and enjoyable sports.”