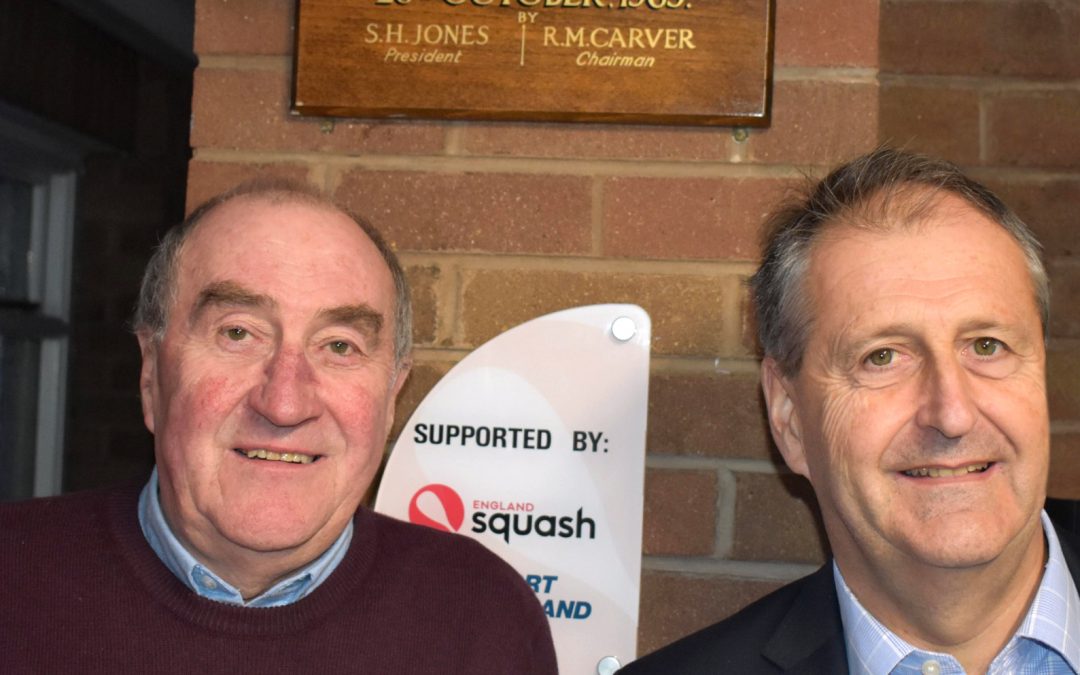 Do you know any previous winners of the Carver Cup?

WLTSC is trying to track down several winners from the past as the popular squash tournament with strong links to the Carver family celebrates its 50thanniversary.

The late Roy Carver, father of Henry – CEO of Carvers Building Supplies in Wolverhampton and member at WLTSC – first launched the Carver Cup handicap squash competition back in 1969, winning the very first event after linking up with a fellow member to guarantee the loan on the building of two new squash courts.

The competition has been running ever since, and, with this year’s finals taking place on Friday, November 22nd, another long-standing WLTSC member and history enthusiast Rod Willetts has been working on putting together a reunion of former champions.

“We are trying to get as many of the former previous winners as we can to come along to this year’s finals night,” says Rod, who last year masterminded a celebration to mark the 80thanniversary of the club moving back to its current Newbridge base from a previous site on Albert Road.

“Sadly four previous winners have passed away, including the former Wolves manager Bill McGarry, who actually won the Carver Cup in 1975, a year after winning the League Cup at Wembley!

“We have managed to track down a few of the winners, but would love to hear from one or two more.

“It has been a great competition for the last 50 years, and all with thanks to Roy for starting it all off after guaranteeing the loan for the courts.

“Having had such a fantastic event last year for the 80thanniversary of moving back to our current location, it should be another great night to mark the 50thanniversary of the Carver Cup.”

As a seven or eight year-old, Henry can still remember his Dad, while on the school run, popping into WLTSC to check on the progress of the courts during their construction in the late 1960s.

“We’d be up the ladders and all sorts taking a look – there wasn’t so much health and safety in those days,” laughs Henry, before revealing the specific history behind the launch of the competition.

“They started the handicap competition, and Dad won it, so he thought, ‘Do you know what I am going to do? I am going to go and buy a cup’.

“And that is how the Carver Cup was born!

“I still remember seeing him playing squash here when I was young, and my memories of this place – through all the years –  are all very happy ones.

“I have played squash here for around 30 years, still play tennis, and I always know that if I pop into the bar for a drink there are people here to chat to, which doesn’t happen at many clubs.

“The Carver Cup is a great competition as well.

“Normally in squash, it is very difficult to beat someone who is better than you, I don’t think it’s like golf where someone might have a real off-day.

“That is why the handicap system is so good, as it really levels things out, and gives people a chance of beating someone even if they are not quite at the same level.”

Carvers is one of the leading and long-standing businesses in Wolverhampton having been founded in 1896 – 11 years after WLTSC – and the company has been a keen supporter of the club over many years.

Both of Henry’s grandfathers were also involved with WLTSC, and Roy was also twice a Chairman and also a President.

Half a century of competition in the Carver Cup lends itself to so many memories, and that includes both Rod and Henry.

“I remember once I played against a really good mate of mine, Alan Mullett,” says Rod.

“Alan was on a bit of a fitness regime so for some reason we both weighed ourselves before the game.

For Henry, his favourite memory was when taking on his own friend Robert Marshall, another much-loved WLTSC member who sadly passed away two years ago.

“I had damaged my right hand to had to play with my left in the final of the plate,” Henry recalls.

“So I was playing with my wrong hand, and pushed Bob all the way before losing 3-2!”

This year’s Carvers Cup with a 32-draw is now well underway ahead of the finals’ night a week on Friday.

Anyone who knows any of the previous finalists is asked to leave a message for Rod at WLTSC by calling (01902) 755265 or emailing club@wltsc.com