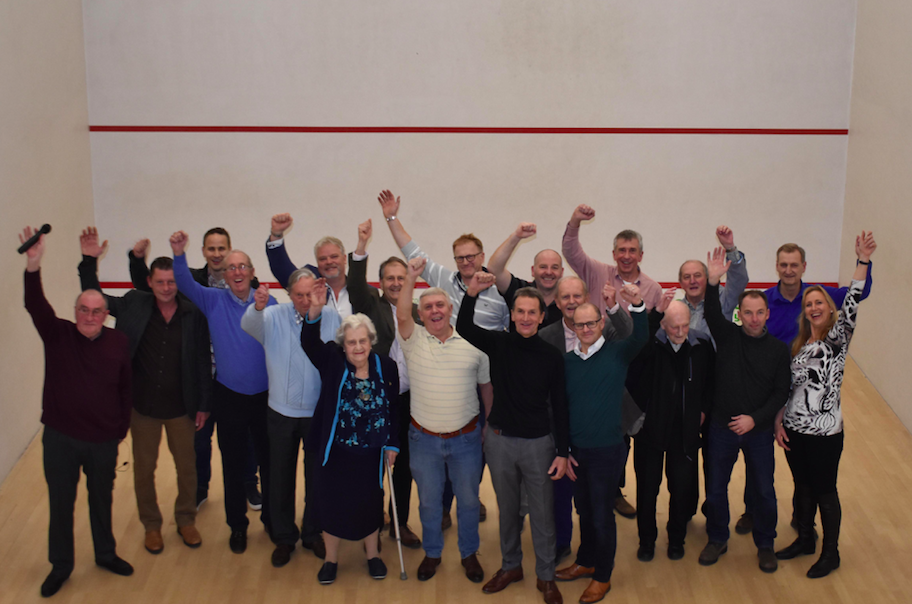 There was a night of nostalgia and sharing memories at Wolverhampton Lawn Tennis & Squash Club on Friday at the 50th anniversary celebrations of the Carver Cup.

The handicap squash competition was founded by the first ever winner, Roy Carver, back in 1969, and Roy’s widow Sheila, and son Henry, CEO of Carvers Building Supplies in Wolverhampton and member at WLTSC – were both in attendance to mark the anniversary.

WLTSC member and history enthusiast Rod Willetts had managed to track down many former winners of the Carver Cup for a champions parade which took place during the evening, alongside the 2019 Finals and a racketball exhibition.

Nineteen of the previous winners attended the finals night, including David Richmond, who won the second ever Carver Cup in 1970.

Four previous winners have now sadly passed away, including Roy, and Bill McGarry, the former football manager who won the tournament in 1975, a year after having masterminded Wolves’ 1974 League Cup Final triumph.

“It was great to welcome so many of our former winners back to the club, including David, who was able to have a chat with this year’s winner, Jordan Evans,” says Rod.

“The Carver Cup has become a key part of the calendar at the club over the last 50 years, and all thanks to Roy Carver for starting it all off after guaranteeing a loan for two new squash courts, which were built in the same year.

“For it still to be going strong half a century later gives a good idea of its popularity, and hopefully it will continue for many years to come.”

All the action was played out in front of Sheila and Henry Carver, bringing back some poignant memories.

As a seven or eight year-old, Henry can still remember his Dad, while on the school run, popping into WLTSC to check on the progress of the courts during their construction in the late 1960s.

“We’d be up the ladders and all sorts taking a look – there wasn’t so much health and safety in those days,” laughs Henry, before revealing the specific history behind the launch of the competition.

“They started the handicap competition, and Dad won it, so he thought, ‘Do you know what I am going to do? I am going to go and buy a cup’.

“And that is how the Carver Cup was born all those years ago!”

Carvers is one of the leading and long-standing businesses in Wolverhampton having been founded in 1896 – 11 years after WLTSC – and the company has been a keen supporter of the club over many years.