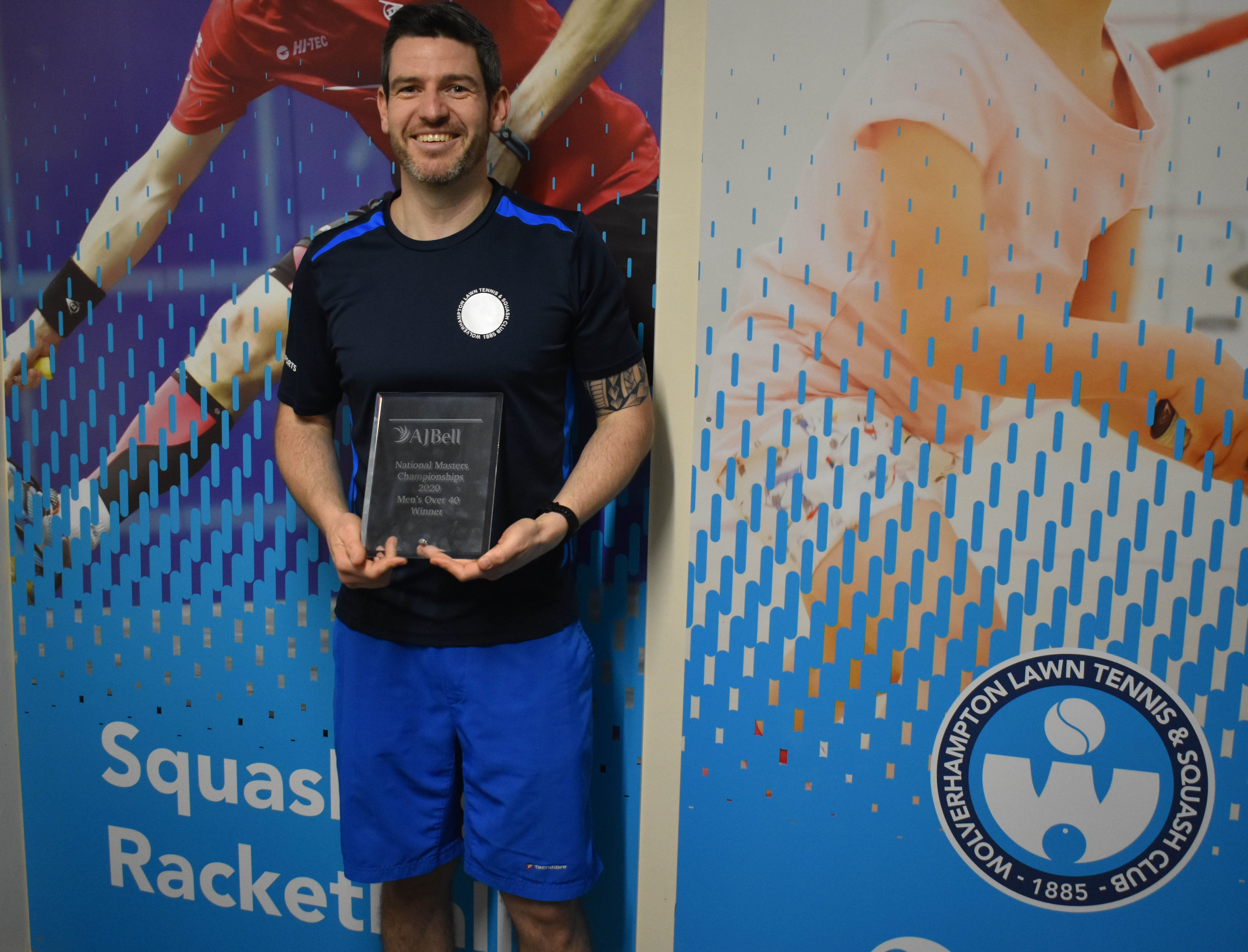 Lewis was number one seed for the tournament, played at Nottingham, but that pressure was just part of what he had to overcome to claim the Over-40s title as a niggling calf injury proved troublesome on several occasions during matches.

Victories over Surrey’s James Greenhead, Berkshire’s Tim Burrell and Nottingham’s Nick Hargreaves took Lewis to the final, where he resisted a potential fightback from Scotland’s Stuart Ayton to claim a 3-1 win.

“I was carrying this injury so didn’t really know how the tournament would go but I managed to come through and maybe changed the way I played to cope with it,” says Lewis, whose previous roll of honour includes winning the same event at Over-35 level when his final opponent withdrew, as well as two British Open titles at Over-35s.

“My calf was really tightening up during the semi-final and the final, which made it tough, but I managed to hold on to win the title.

“Without the injury I might have felt more confident but at the same time, I might have adopted different tactics so you never quite know what would have happened.

“Obviously I am proud and delighted to become national champion – it was my first competition at Over-40s level and not many people will have one of these titles so it is something I am very happy to have achieved.”

Lewis’s squash journey began as a seven-year-old in his home city of Leicester, where he progressed through the national age groups as a junior before stopping playing at 17 due to work commitments.

He picked up a racket again whilst coaching at a club in Leicester, and spent three years on the professional circuit in his mid-twenties where he was just outside the top 100 in the PSA world rankings.

After the club where he was coaching closed down, remaining on the tour became difficult, and Lewis moved into coaching, both for the last decade at WLTSC, and previously as a regional coach for England Squash.

His coaching duties at WLTSC are now combined with the ‘day job’ of being a postman, and he also represents WLTSC in the Warwickshire League and Doncaster in the Yorkshire League.

“It makes for some busy days, but I really enjoy it,” adds the 40-year-old.

“Playing squash has open the doors to meeting so many people and enjoying different experiences, as well as the obvious benefits to health and fitness.

“I am really enjoying coaching at WLTSC, where we have some good young players with a lot of potential.

“I am working with a whole range of juniors from four years up to 18, some of whom play in national competitions.

“The highest ranked junior at Wolverhampton at the moment is Connor Walton, aged 10, who is currently in the top 20 in England.

“It would be good to have more players take up what is such a great sport for so many reasons.”

Lewis is also now leading with Steve Pearcey on a Thursday night adult and team squash fitness and coaching session at WLTSC, focused on helping players to develop and improve.