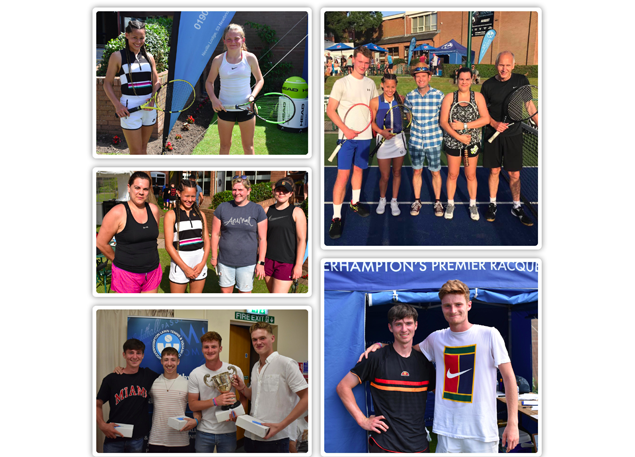 Adeola Greatorex and Tom Welsh were the big winners as the Wolverhampton Lawn Tennis & Squash Club’s annual championships came to a scorching end at the weekend.

The Howard Wright Annual Tennis Championships featured five main events, and a further 14 graded or consolation competitions, played out over three weeks and completed in front of a large crowd at the Newbridge club on Saturday afternoon.

Greatorex, just 14, completed a clean sweep of titles, successfully defending the Ladies singles title by overcoming 13-year-old Hetty Willis, and then teaming up with Stefanie Walczak to beat Cathy Lea and Sarah Willacy.

Greatorex had already partnered Ross Fletcher to the Mixed Doubles title courtesy of a Champions tie break victory over Robin Chipperfield and Walczak on Friday evening.

Welsh became a new name on the Men’s Singles roll of honour by coming back from a set down to defeat defending champion Fin Cook, and then made it a double by partnering Ed Cooper to victory against Cook and Taylor Penny in the Men’s Doubles.

The tournament was organised by two of the club’s coaches, Max Thomson and Amber Quick.

“It was a fantastic weekend to bring an end to three weeks of competition, and the fact that so many of the matches were decided by Champions tie-breaks shows just how competitive the finals were,” said tournament co-ordinator Thomson.

“The way the events are graded, it means club members know they are going to come up against players of similar ability, and everyone has a chance to make progress.

“Whilst it was very competitive, it was also a lot of fun, and we were delighted to see so many people at the club to enjoy not only some great weather but some great tennis as well.”

Next up, WLTSC are hosting the Staffordshire County Championships from August 25-31, with entries now open in 37 different competitions from under-8 level to over-45s.