Hughes and Hyde Are Best Of British! 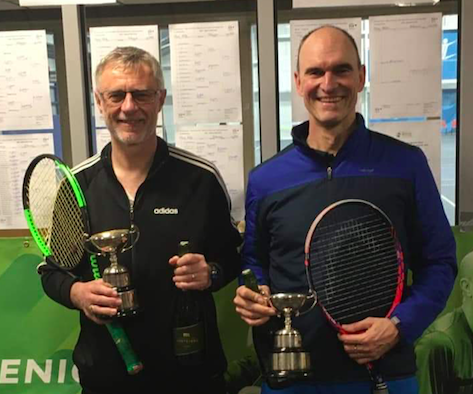 The championships were held on Sunday 26th January and comprised events for Mens and Ladies in age groups from 35 and over up to 85 and over. A whole week of competitive tennis at this Grade 1 International Tennis Federation tournament included players such as former British number 1 and Wimbledon semi-finalist Roger Taylor MBE.

Marc Hughes (from Wolverhampton Lawn Tennis and Squash Club) and Adrian Hyde (from Wall Heath TC) were a scratch pair who only came together days before the entry deadline when their prospective partners couldn’t make the competition. Although they have played on the same team for Staffordshire they had never played doubles together before.

Marc is the Sports Manager at Wolverhampton LTC & SC and Adrian is the Head Coach and Chairman at Wall Heath TC and both were delighted to represent these clubs and Staffordshire in the finals.

The pair had progressed smoothly to the final without dropping a set to two pairs who had previously won the title. In the final of the British Indoor 55s doubles they played Alan Jordan and Scott Martin from Cambridgeshire and completed a great week’s tennis by winning 6 -2, 6 – 3.

Both Marc and Adrian are huge advocates of the game of tennis, recognising its value in raising or maintaining fitness, providing a means for social interaction as well as the opportunity to enjoy a great sport.

Adrian commented, “It was great to partner Marc in such a wonderful event and see so many senior players still enjoying the game and playing at such a good level. It’s fantastic to be British Champions and we both value the benefits the game has given us.”

“It was great fun linking up with Adrian for the week, and even better when we progressed through the draw and ended up winning the final” said Marc. “I am always encouraging players of all ages at WLTSC to get on court and enjoy some competitive tennis and once we got out on court all those competitive instincts kicked in.”

“It is particularly pleasing for Adrian and myself to be flying the flag for two really good clubs in Staffordshire, and hopefully showing that you are never too old to enjoy some success!”