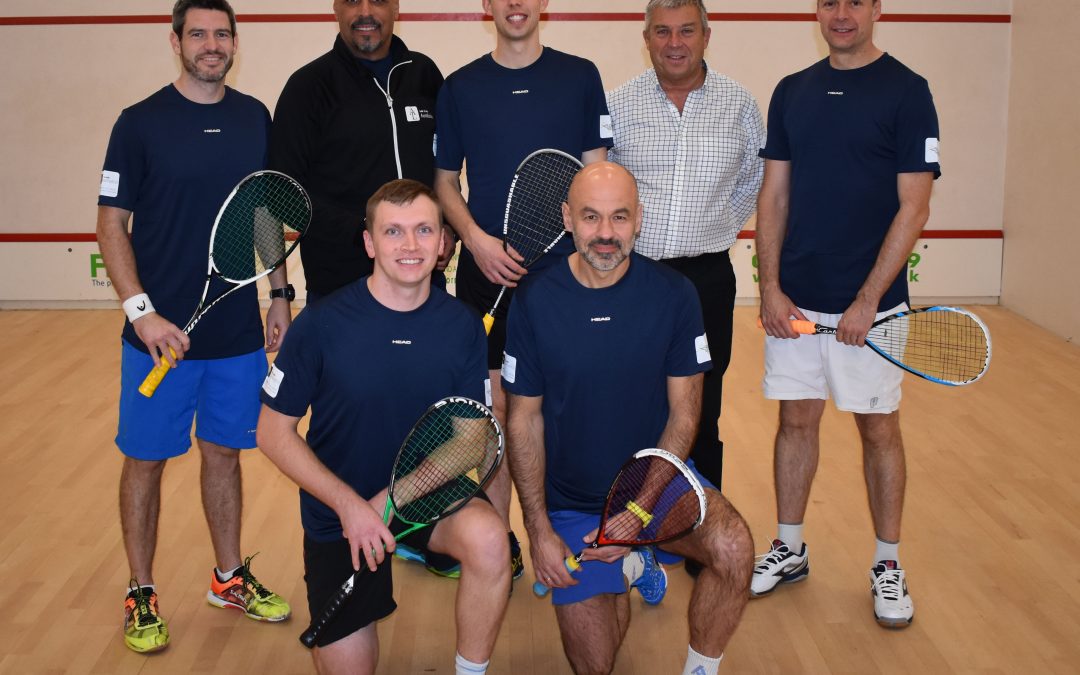 The new sponsorship deal for the Warwickshire Men’s Squash first team was officially launched as new signing Miles Jenkins played his first home game of the season against West Warks on Monday night.

Viking Electrics, AL Aesthetics and K. Becker have all sponsored the team this season, paving the way for Jenkins to join Darren Lewis and the rest of the squash as they embark on the new campaign in a hugely competitive division.

Jenkins, ranked just outside the world’s top 200, most recently took part in a tournament in Texas, reaching the quarter finals, before returning for his home WLTSC debut and helping the team to a 3-2 victory to move to third in the Warwickshire Winter League table.

He met representatives from the sponsors – Roy Cashmore (Viking Electrics) and Ash Labib (AL Aesthetics) – before taking to the court for his home debut.

“It is great to be here and I am really looking forward to it,” said 24-year-old Jenkins.

“It seems like a great club and I’ve had a really nice welcome.

“The sponsors coming in to support the team has been a big help and it was great to meet them ahead of the game.

“Everyone here is very keen to promote squash, and we are looking forward to hopefully enjoying a successful season.

“It’s been a reasonable start, and maybe we can try and push for a top three position whilst making sure we can keep well away from relegation.”

Roy, from Viking Electrics, said: “I was proud to attend the debut match for Miles at WLTSC.

“Miles and the team had a challenging match and displayed an excellent level of squash, and the audience were gripped at watching every point.

“This is exactly why Viking Electrics has sponsored the First team at WLTSC, to regain the energy, passion and commitment for players at every level.

“I want to encourage players, spectators and all enthusiasts to support the game, which I personally play and now sponsor.”

Ash, from AL Aesthetics, said: “I have been a member of this club for 26 years, and I love squash.

“I feel very passionate about us developing the game and getting young players involved.

“I wanted to help to make sure that our team look the part and that we can proud to see them out there representing WLTSC.

“It’s great to welcome Miles joining Darren and the other guys, and hopefully it is going to be a fantastic season.”

Jenkins and Lewis were joined in the team, being captained by Allan Walton, by James Treble, Jason Fletcher and Alex Stojanovic against West Warks, with the 3-2 win.

The team are next in action in a top-of-the-table clash away at second-placed Birmingham University on Monday.

Everyone at WLTSC would once again like to thank Roy, Ash and Karl for their sponsorship of the Warwickshire League team and their help in promoting squash to a wider audience.