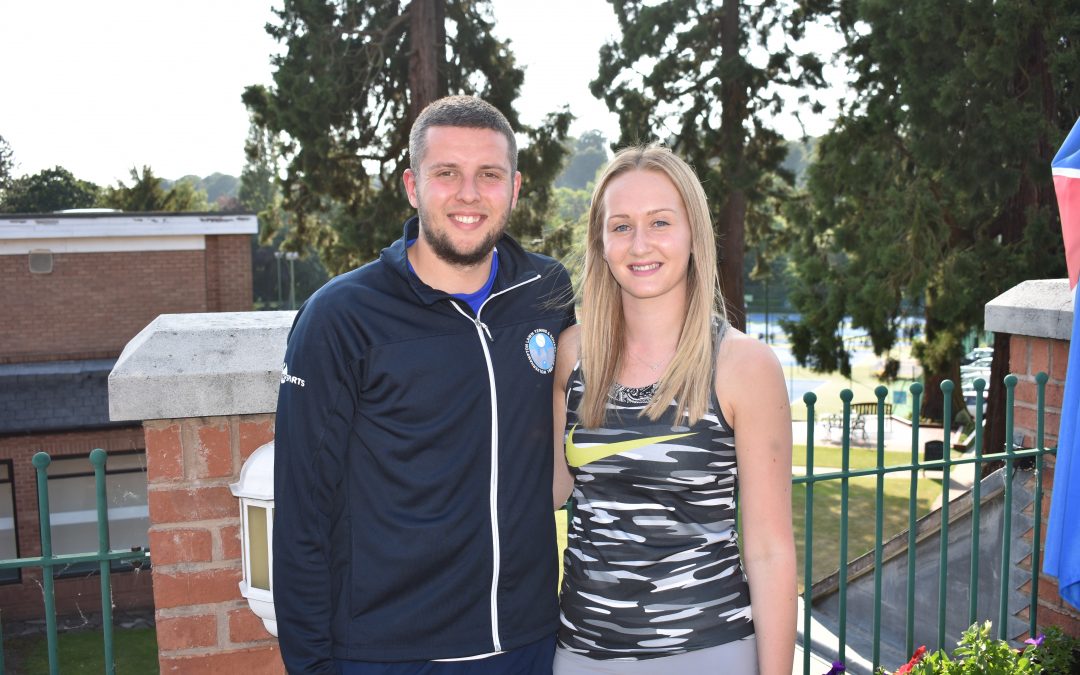 For Josh Whaites and partner Hannah Perry, less than six months into their membership of Wolverhampton Lawn Tennis and Squash Club, they already feel right at home.

Josh has picked up from where he left off at his previous club in Telford by throwing himself back into team tennis, while Hannah has picked up a racket for the first time since her schooldays…and is loving it!

On top of that both are fully settled into WLTSC life, enjoying not only the fun and competition of taking to the court, but also the sociable atmosphere of meeting new people and making new friends.

“Hannah previously lived in Tettenhall, and for many years I have worked not far from the club, so we knew all about it,” Josh explains.

“But I lived in Telford so played for a club back there, up until when we moved in together in Willenhall back in August and the distance became a problem.

“I didn’t really play tennis through last Winter and then, when the New Year arrived, it was one of those times when I decided I needed to get fit and healthy again!

“I came down to the club and Marc (Hughes) showed me around and It wasn’t just about the great facilities but also the fact that everyone was so friendly and welcoming.

“Straightaway I thought, ‘yeh, let’s go for it’.

“I went to my first tennis session the day after joining and that was that.”

The next step was Hannah also taking the plunge to pick up a tennis racket again, but, as it turned out, she didn’t need much persuading.

“I had played tennis at school and used to enjoy it but I hadn’t played for a good few years since I left,” she explains.

“I came down here to watch Josh play, and then we both came to watch a league match, and I started to get into it a bit more.

“I knew Josh was going to be spending more time here at the club so, for me, the question was why don’t I try it as well?

“I started off with a couple of trial beginner sessions, which I really enjoyed, and so from there I decided to take it a bit more seriously, and take up a membership.”

Both have already made excellent progress at their different levels.

Josh has turned out for several of the club’s league teams, and is keen to improve even more, whilst Hannah, who just a few months ago needed a crash course even to learn the basic rules of the sport, is also now playing competitively.

“I have gone to all the beginners sessions and am now also getting involved in the Rusty Rackets sessions,” she says.

“It was all about building up confidence for me, but (coach) Jo Webb has been great with all of us beginners.

“She has coached us and also set up singles and doubles leagues, and I can’t believe how far I have progressed.

“I didn’t realise at first but my doubles partner now –  Amelia Kakol – actually went to her first session at the same time as me.

“At that point I could hit the ball, but had no idea where it was going to go, and I didn’t even know the rules and how to score!

“In one of our matches, we had a really impressive and competitive rally ….. and looked at each other as if to say ‘was that really us’?

“I have always been one of the least competitive people you could ever meet, and the first game I played, my opponent said that I’d better be ready because she was really competitive.

“I wasn’t expecting it, but when we started, I became really competitive too, and now I can’t get enough of playing matches, and was down here every day during half term.

“There is a really different group of us all at beginners level, but we have all come together to play tennis, sometimes with hilarious consequences, but it is always great fun.”

And that hilarity has sometimes become a bit of a talking point, as Josh explains.

“There was one night when I was playing a match and all I could hear was laughing and giggling from a court in the corner – yes, it was Hannah’s group,” he says.

“We can also both come down together and have a knock if we want to, especially when the weather is good – it’s a nice and cheap Friday night’s entertainment!

“For me I have really enjoyed it, and want to keep developing through the teams if I can, and perhaps start having some coaching.

“I have just played tennis so far, but when I have more time available I would also like to have a go at squash and start using the gym as well.”

Above all else the couple have been particularly appreciative of the warm welcome they have received, and the friendly atmosphere throughout WLTSC.

“Having grown up not too far away, I think in the past there has been a bit of a stigma around the club, that it wasn’t welcoming, but that couldn’t be further from the truth,” says Hannah.

“People are always friendly and will always say hello, and I have got to know so many different people either from my own sessions or those who Josh has been playing against.”

“I have been a member of golf clubs, so I know a little bit about places that might not be the most friendly to new members,” Josh adds.

“And where I was in Telford, it was a small tennis club which was really close-knit.

“WLTSC is far bigger, but also has that close-knit feeling.

“There is a really good balance of people at the club, and a lot of young people as well, and a really good atmosphere of togetherness.”