The Legacy Of Dudley Shrive 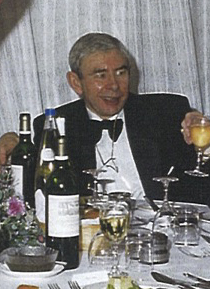 A Wolverhampton man who defied a severe disability to live a full and active life has left a legacy of £150,000 to two sporting organisations which were so close to his heart.

Dudley Michael Shrive, known as ‘Chip’ or ‘Chippy’, passed away in March at the age of 79, having suffered from polio from a young age which left him with no feeling in his legs and in need of wearing calipers and requiring sticks to walk.

But that didn’t stop him from enjoying socialising at Wolverhampton Lawn Tennis and Squash Club, to whom he has bequeathed £100,000, and being a spectator at Wolverhampton Cricket Club, who have received £50,000.

One of the executors of the will, David Cotterell, was a friend of Dudley’s from an early age having grown up together in Finchfield, and remembers his friend powering down the road on a tricycle, firing an air rifle, and canoeing down the canal from Compton.

“Chip never wanted to be thought of as different to anyone else because of his disability,” said David.

“He had such a positive attitude to life and was an outgoing, sociable person with a loud voice!

“He would go and watch cricket at Wolverhampton Cricket Club and socialise at the tennis and squash club at Newbridge, and both of those places were extremely important to him.

“The tennis club was his family.”

A former pupil at Birchfield School and Tettenhall College, Dudley went into business, first servicing lawnmowers and then sheet metalworking under the name ‘Shrive Engineering Company’.

Martin Phillips and Mary Warwicker were both friends of Chippy, and in later years would meet up for Christmas dinner.

“Chippy was determined and independent and, despite his difficulties, he succeeded,” they said.

“More than that, he wanted to help others.

“For many years he worked with The Princes Trust and was mentor to several young unemployed people starting small businesses in the West Midlands.

“With his laugh and the widest of smiles, Chippy had a gift…the gift of leaving you feeling better for meeting him.”

Part of the money left to WLTSC will be used to improve disabled access and facilities at the club.

“We are involved in a ‘Fill the Gap’ project at the moment to improve our facilities and accessibility for disabled and elderly members and visitors to the club,” says WLTSC Chairman John Hollingsworth.

“Chippy’s legacy will help us achieve that objective.”

“This will improve the accessibility not only for our visually impaired and disabled cricketers, but for visitors, members and players alike.

“It was always a pleasure to see Chippy at our club and we hope that he would be pleased to see us using his legacy for the benefit of others.”

Chippy Shrive
I first met “Chip” at Wrottesley Country Club in the Sixties where he came as a small group of friends, to socialise after the “Squash Club” bar had closed at 10:30pm.
In those days he’d turn up in a green Morris Minor pick-up truck, a contrast to the “smart” vehicles of others which he certainly admired. That truck served him well for both business and practical needs.
Years later he still showed his intelligent respect for capital, agonising endlessly over business spend for say a new machine tool. Frequently seeking advice from others on its precise suitability. Privately was loyal and generous to friends and family.
Back then he was characterised by a cheerful disposition and uninhibited laugh. You always knew when Chippy was in the house.
Later on after business success, his interest in sporty cars continued. I took him to Silverstone, July 30th 1994. He insisted that I drove him in his quite new BMW. The BMW was probably his greatest indulgence other than a tray of sweets that accompanied his armchair at Chequerfield Drive.
Those sweets apart, he was careful what he ate, probably he knew weight was linked to mobility. For a while he obsessed about E factors and what was in his food and later had a passion for “pigs in blankets” (bacon wrapped sausages) with Christmas dinner.
How Dudley came to be “Chippy” is a mystery. He certainly never had a chip on his shoulder.
His attitude was unlike a disabled person. He was determined and independent.
When he bought a computer for his work, he persisted with further IT education at college until it terminated through lack of disabled access after an accident there.
Despite disabilities, he succeeded. More than that, he wanted to help others.  For many years he worked with The Princes Trust and was mentor to several young unemployed people  starting small businesses in the West Midlands. A modest man, he was particularly proud of the many Christmas cards received from Prince Charles recognising his efforts.
How were his attitudes formed? He told that his earliest years (at Birchfied) were not the easiest.
Social formations in early years can be robust for many. He went on to Tettenhall College where lifelong friendships were formed.
I have wondered if Chippy’s cheerful demeanour was a “learned behaviour” to encourage social interaction or whether it was just the man.
A friend in Hampshire is a total clone of Chippy, in build, disability, social attitude and outlook. Another polio victim of similar age who became a neighbour.
Whether early guidance was given to victims isn’t clear. The parallels striking.
Socially, some people have difficulty in being immediately open to others who are “different” in some way. A serious disability falls into this group. Being cheerful and inclusive overcomes that barrier.
Certainly Chippy was open and cheerful never dwelling on his difficulties but often interested in how other people managed to cope when faced with issues such as walking.
With his laugh and the widest of smiles, Chippy had a gift.
The gift of leaving you feeling better for meeting him.