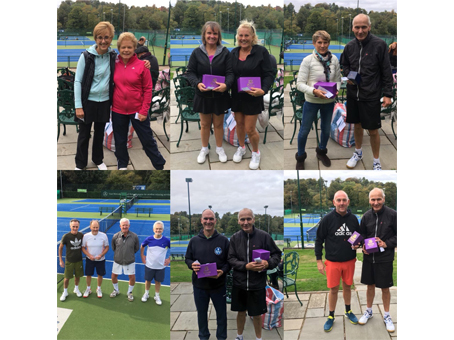 Various main draw and plate competitions were played out during the tournament, which was open to male players of 45 and over and females of 40 and over.

“The standards were very high which they always are for every tournament at the club, and the finals were fiercely competitive.

“It is important to have a ‘stand-alone’ tournament for Veterans and Vintage age groups, just like it is for the juniors.

“The standard at the club is so high that when the veterans enter the main tournament they are maybe not recognised as much as they should be.

“In the same way as the main tournament sees juniors perhaps playing up a few age groups, it is the same in reverse with the veterans.

“Having this event showcases their abilities and they produced some great tennis during the tournament and in the finals.”

The Veterans Men’s Singles title went to Marc Hughes, who defeated Robin Chipperfield in the final, with Jane Hatton claiming the Ladies’ competition thanks to victory against Cathy Grinsell.

Chipperfield teamed up with Steve Giddings to win the Men’s Doubles against Dave Tilley and Jonathon Evans, with Grinsell and Gerry Davies winning the Ladies’ event by overcoming Liz Allan and Jo Birch.

Chipperfield and Jane Hampson were crowned Mixed Doubles champions after victory against Giddings and Tracy Hook.

In the Plate competitions, Neil Fisher beat Peter Langston to claim the Men’s Singles and Alan Durban and Mike Shaw defeated Steve Turner and Tony Costin in the doubles.

The next big tennis tournament at WLTSC is the FA Cup style knockout event where competitors of all ages and abilities could draw each other, with the finals then played in the indoor courts complete with similar use of lighting, music and atmosphere to the ATP World Tour finale at London’s O2 Arena.